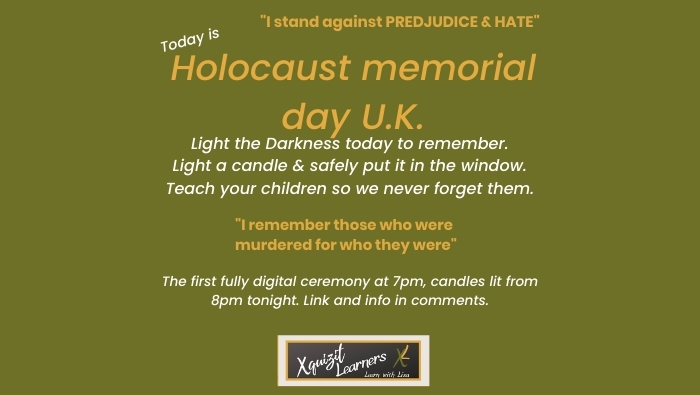 The Holocaust: The attempt by the Nazis to kill all the Jews in Europe.

Today is the U.K Holocaust memorial day for 2021.  For the very first time the fully digital ceremony is being shown from 7pm to 8pm GMT on the Holocaust Memorial Day Trust website.

The trust is encouraging everyone in the U.K. to light candles to put safely in their windows from 8pm to remember the lost. As you light the candle, see it as a symbol of you taking a ‘stand against prejudice and hatred’, and ‘remember those who were murdered for who they were’.

The Holocaust Memorial Day Trust website is packed with information including stories from survivors and family members of those who died. The HMD’s resources focus is on the survivors and victims. The people are at the heart of the learning giving them an identity which the Nazi’s attempted to take.  They also have a page dedicated to school age children and learning ideas. You can access these activities suitable for mostly Primary age children over 7 years old at https://www.hmd.org.uk/take-part-in-holocaust-memorial-day/schools/primary-schools/

Teaching children about the Holocaust

It is so important that we do share with our children these terrible historic events, and explain to them how important it is that we continue to learn so that we can prevent anything similar happening again. It is a sensitive topic, and the age of your child will determine the conversation and depth to which you address it.

Using story-telling to engage children’s imaginations can help them connect to the history.  In the younger years you can focus the discussion on difference and equality rather than introducing genocide. Other groups such as disabled and Roma were also targeted by the Nazis along with Jews.

I found some great suggestions for children’s stories which would be a good introduction to the holocaust.  They came directly from chapter two of the book ‘Teaching Young Children about the Holocaust’.  I focused on books for ages 4 to 8 years but you can read about other age ranges in the chapter which can be found here.

Story books to use

Losing Things: Is about losing things and children can talk about what might make them feel better if they knew they wouldn’t find it again? What might they do to make someone else feel better when they’ve lost something (or someone) they won’t see again?

Flora’s Blanket: is about a little bunny at bed-time who has lost her special blanket. She finds it in the end, but you could talk about how she felt before she found it.

Laney’s Lost Mama: which is about a little girl getting separated from her mother in a department store. While this story has a happy ending, it opens the conversation about losing people and the feelings you might have in that situation.

The Sneetches: This Dr. Seuss book is a wonderful way to expose kids to the ideas of prejudice, discrimination, conformity (and commodification).

The Sneetches Written by Dr. Seuss and published by Random House, New York, 1961

The diary of Ann Frank is an appropriate story as an introduction to the Holocaust for older KS2 children and an easy to read version is available here on the hi-lighted hyperlink above.

Using Art to teach about the Holocaust

Art activities are a great idea for the youngest and the HMD has examples of these in resources. I also found some wonderful sculptures which tell a story of the holocaust. These are available as part of the Holocaust Images Sculpture Collection at

“The Holocaust Images Sculpture Collection is a memorial to the Six Million Jews who died in World War II. It has also been a teaching tool for the generations who have been born since that time. The collection, which is appropriate for all age groups, has had a tremendously positive impact on the thousands of individuals who have viewed the exhibit.( text taken directly from the website)

I chose some images which I thought would be good for introducing children to the idea of the inequality of the holocaust. Be mindful of not quoting the information direct from these as it would not be appropriate for younger children, however it gives you, the adult, an idea of the sculpture and meaning behind it.

(The following information was taken directly from the website to describe each sculpture.)

This sculpture is dedicated to the nameless, faceless, masses.

Named for her Biblical kinswoman, young Miriam pulls the orphaned Jewish children from the muddy waters.  They are trying to find a quiet place to hide and rest.  They cannot walk the roads, for it is not safe.  Stare at the Nazi flags and the long empty road.  Can you hear the tanks coming?

The outside walls of the house provide the thinnest of barriers against hatred.  In blood red the world identifies Jews first with graffiti and swastikas.  Inside the house, cowering in the corner, are the remnants of a family: a mother with two of her children.  At least for this moment the walls protect.  They are safe, and still together.

Nazis are at the door.  Is no one home?  Look carefully, in the cupboard, under the basement trap door, in the closet, in the bed covers.  Fourteen people are hiding.  Will they be found?  Sadly, yes.  All but one daughter hiding between the blankets and the mattress were shot and killed.  She was the sole survivor of the entire town.  This is a true story.

They were there once, a long time ago. Now they return. Why? What do they seek? What do they remember? It is a place of endless sadness, yet an indelible piece of the fabric of their lives. The flowers in the lady’s hat still match those on the ground around her. A piece of them will be rooted there forever. They cannot let go. Perhaps they come to mourn their parents.

When teaching about the holocaust we must be mindful to correct any assumption that it was the Germans responsible, or the camps were Polish.  Of course it was the Nazis and their collaborators from other European countries who committed these crimes against humanity.  The concentration camps were in Poland, however it was Nazi occupied Poland where the camps were run by Nazis.  There is a danger in calling them ‘Polish concentration camps’ that implies they were run by the Polish government.  Such was the concern that the Government has released legislation to avoid use of the term.

What happened in the Holocaust?

The 27th January was chosen in 2000 as a date to remember the holocaust because it marks the anniversary of the liberation of Auschwitz-Birkenau. This was the largest of the Nazi death camps.

The Holocaust took six million lives, and millions of others were killed under Nazi Persecution which began in 1933 with unfair laws and oppression for Jews. When the Nazi’s came to power they restricted Jews rights and freedom, and in September 1935 they introduced the Nuremberg laws.

Poland was invaded in 1939 and war was declared by the United Kingdom and France. In Poland Jewish families were forced to live in ghettos set up on the edges of the cities in 1940. The Warsaw ghetto was the biggest with 400,000 Jews living in 1.3 square miles.

The ‘Final solution’ came in 1941 when Jewish people were murdered in ghettos, mass shootings, concentration camps and extermination camps.

U.S.S.R was invaded in 1941 and Nazi task forces were set up across Europe called Einsatzgruppen (task forces). Between June and December 1941 over 1.5 million Jews were killed.

By the end of the second world war in May 1945, two thirds of Europe’s Jews had been murdered. These atrocities were an ‘attempt by the Nazis and their collaborators to murder all the Jews in Europe’ which as defined by the HMDT is known universally worldwide as the Holocaust.

In my twenties I was in a relationship with a man who’s grandparents had both fled Poland to the UK, but the rest of their family had perished in the ghettos and camps. I visited the National Holocaust Memorial Museum in Washington D.C. at that time, and it was a phenomenal learning experience for me.

I’m so glad that I visited alone, as I spent 6 hours in there consuming the content. It was by far one of the most emotional experiences that I have ever had! It was so unbelievably powerful, and I cried many, many tears that day.

I know how very important it is to get the Holocaust remembrance message out there. So many survivors and surviving family members are sadly being lost to old age, but we must keep their stories being told. It was one of humanities most evil acts in history and it needs to be remembered.

There is so much hatred and lack of empathy currently in our beautiful world, and it saddens and frightens me that time has moved on so far, and yet we still have prejudice and hatred present. Sometimes it seems we have not learned the lessons that prejudice in the wrong hands combined with power is capable of. Genocide has happened since the second word war in the world, and is unfortunately still happening. That is why no matter what, we need to keep talking and teaching.

Claim your free gift and receive all notifications from Xquizit Learners. Unsubscribe at any time.